Harmon Dobson opened up the world’s first Whataburger on Ayers Street in Corpus Christi, Texas. He had a simple goal, to serve a burger so big that it took two hands to hold and so good that with one bite customers would say, “What a burger!” 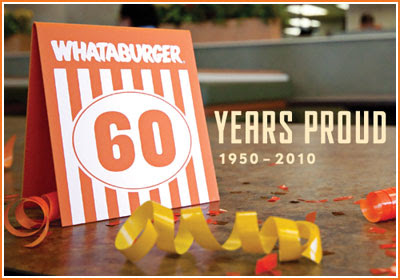 In celebration of their anniversary, you can get a free Whataburger by wearing orange to a Whataburger restaurant today, August 3, between 5pm-8pm.

Note:  As was pointed out in the comments, I mistakenly put the date in this post as Aug. 6.  It has been corrected.  The anniversary and the free burger promotion are August 3, 2010.
Posted by Ken Kuhl at 7:29 AM