Some real, live Chipotle employees took to Reddit yesterday to answer all those Chipotle questions you've been dying to ask! Here's a run-down of the most interesting answers, insider info and 'secrets' revealed!  (Answers are in italics.)

The Quesarito is a 'secret' menu item at Chipotle. You can ask for it and hope they'll make it for you! It is two burrito tortillas with cheese between them that is heated and pressed to essentially form a quesadilla. This quesadilla is then used as the wrap for your burrito. Do employees get annoyed when asked to make it?


Most people I know get a little annoyed when people order a quesarito especially when there's a line. But I personally don't mind! They just take a bit longer to make. And I thought it was pretty funny when TB came out with the quesarito, of course nothing beats the Chipotle original quesarito!

If your burrito is fairly large with a lot of stuff in it (especially liquidy stuff like sour cream, hot sauce etc) yes it is very annoying to roll and can be really difficult


Getting Extra stuff on your Burrito:


Q: Is it rude or not allowed to ask for extra beans or veggies? I always want to but I feel like they measure it so specifically I didn't know if it's a rule or not?

A: it's not rude unless you ask it in a rude, demanding way. just say "can I have extra ___ please?" and they won't have a problem! lots of people do it.


Q:  What's something you prefer from chipotle that very few know about?  A:  There's not much "secret" things that the workers know that the customers don't, but I guess we do get creative with the stuff we have. I've made a mini quesadilla/taco thing and it was great. (You take a soft taco tortilla, cover it with cheese, fold it in half, melt it in the press, open it back up, and make your taco. Also, we have this honey chipotle vinagreitte that's really good if sprinkled a little on top of your food (free!) 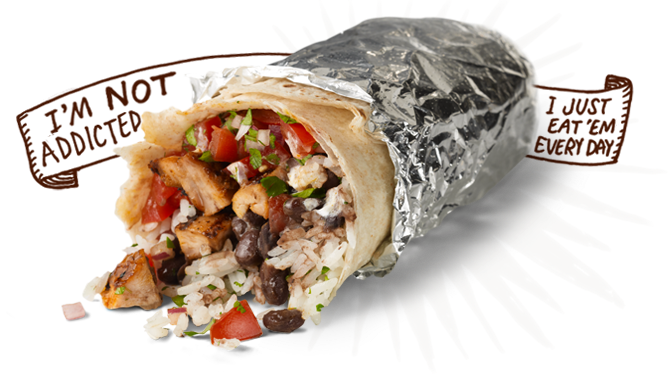 More food in a bowl than a burrito?

Q:  Why do I feel that I am getting more food in a bowl than in the burrito?  A:  That's because you are. In a bowl, you have all that bowl space and even if you get it filled completely that it starts stacking and getting taller, the lid is able to squish it down. But with a burrito, everything kinda needs to be in the center and be able to rolled into a burrito, so the portions are a bit smaller. but what you can do is get a bowl and tortilla on the side for no charge!

Q:  The recipe?  A:  Any type of white rice will do, we add a bit of soy oil, fresh ciltrano and citrus lime juice. basically just add a squeeze of lime juice and cilantro to your rice and mix! be sure not to make it too soggy or too dry. or, if you ask one of the workers or managers they'll be glad to tell you how it's made :)

Q:  Can I get plain white rice without cilantro?  A:  Absolutely!! You can ask them for plain rice, a lot of people do it and we already have plain rice in the back.

Recipe?  A:  We actually get the chips uncooked in a box, and we fry them. After it's fried we squeeze lime juice and sea salt on it. Made fresh every day :)  also: if you want more lime you can just ask them for lime (we always have some in the back) and they'll give you some for free to squeeze onto your food! You're welcome :)

Q:  Okay but for real though, there is crack in the guacamole right?  It's unreal!

A:  Dude tell me about it. our guac is made of avocados, lime juice, sea salt, cilantro, onions, jalepeno, and lots of love!!!!!

Another Chipotle employee commented: Former employee here. Lots of love is lot's of labor, the avocados are hand pitted and smashed daily. The people at Chipotle work extremely hard, everything seems so fresh because almost all prep work is done the same day 8-11, almost nothing is received premixed, or even pre-cut. Props to your local Chipotle workers, they're bustin their asses off.

Chipotle Kitchen Manager here! We don't serve queso sauce because there is no way to do it with the kind of cheese we use. All-natural cheese has oils it that would separate and get nasty if left to sit melted. However, I have heard that we're still trying to figure it out! Don't give up hope yet!

from another Chipotle employee:
When I was being trained in, we watched a bunch of videos on Chipotle's ideals for free-range livestock and all that jazz. Our managers straight up told us that while we're doing our best to get only free-range, grass-fed, hormone-free meats, the demand for beef is more than we can actually get from free-range farms. That's where this sign comes from. Last I checked we were at a large percentage (weren't told specifics) of beef at those free-range farms.
In fact, we recently discussed an article Steve wrote, in which we were going to be importing quite a bit of steak from Australia, as we cannot meet our goal of all our steak being free-range and grass fed in the US yet. It sucks that we have to choose between local food sources and the free-range, but we hope that bringing this to light will let farmers in the US know that there is a market for non-"factory farms."

A career with Chipotle:

(from yet another Chipotle employee) Current chipotle GM here. 97% of promotions are internal. I started on prep, cutting veggies and sloshing through dishes. Worked up from there into kitchen manager, service manager, and finally GM in a little under 2 years. I'm 23, no degree. I make $53k base salary but get a $10k bonus for every crew member I promote into a gm position (expectation is two a year, if you are in a good area it can easily be 5+). Very very few people can be hired into these roles externally, mostly because chipotle is all about creating a special people culture where top performers are empowered to achieve high standards. We believe that getting the right people in crew positions and developing and encouraging them to take ownership of the entire store will allow everything else to fall in line. So our management culture is obviously a lot different from any other concept's where financials and such are the focus. I love the hell out of it though. I'm expecting to become a team leader (area manager) by 25 and then I will be looking at 6 figs.
more: The store level managers do all hiring and we hire based on 13 characteristics we believe to be readily identifiable and that cannot be taught but are ingrained in a person's upbringing-things like smart, happy, infectiously enthusiastic, etc. in the too stores, a candidate will go through three interviews before being hired. Once with the gm, once with an hourly manager, and once with several crew members. These are the things we do to help our crew "own" the store. They make decisions on who to hire and who to fire, who the next manager should be, etc.

Q:  So I came across that documentary on Chipotle on Netflix. Have you seen it? Is it accurate? A: Yes! I've seen it twice actually, everything is pretty accurate. you should watch if you care about the background or history of chipotle, if not, it could be boring.


Q:  How do you feel about Taco Bell?

Here's a link to the complete Reddit AMA.  It started with one user doing an AMA, but other Chipotle employees also showed up and answered or expanded upon some questions.  This was not an 'official' Chipotle AMA, but there is no reason to believe these employees aren't who they say they are.