Has the King infiltrated McDonald's

A tipster sent this video by some guys who were eating their burgers at a McDonald's in San Francisco when they discovered the BK King on the hamburger bun: 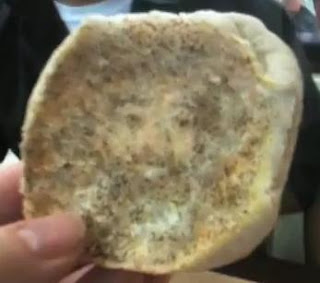 Has Burger King found some ingenious viral marketing toasting technique or is this just a BK miracle.
Either way, McDonald's needs to be checking their buns!

The guys who found it have saved the bun and are selling it on ebay (just as they predict in the video below).
Here's the full video:
Thanks to Jen for the tip!