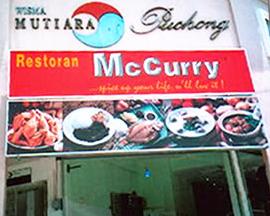 Fast food chain McDonald's lost a lawsuit in Malaysia on Wednesday after an appeals court overruled a decision that its trademark had been infringed by a local restaurant called McCurry.

"Where the learned judge, with respect, erred is to assume that McDonald's had a monopoly in the use of the prefix 'Mc' on a signage or in the conduct of business," Judge Gopal Sri Ram said, overturning a 2006 ruling in favour of McDonald's.

The McDonald's operation in this Southeast Asian country of 27 million people is run as franchise by prominent businessman Vincent Tan and has 185 outlets, according to the company website.

McCurry, by contrast, serves Indian fast food from one restaurant in Kuala Lumpur as well Malaysian dishes such as fish head curry and is short for "Malaysian Chicken Curry", according to the company website.
Posted by Ken Kuhl at 11:32 AM

Email ThisBlogThis!Share to TwitterShare to FacebookShare to Pinterest
Labels: McDonald's

The recent McDonald's v. McCurry ruling is not surprising. Just by the three main DuPont factors alone, appearance, sound and meaning, these two marks are arguably not confusingly similar. Add to that the difference in menus, and the difference in trade dress, and you have a pretty strong case for McCurry, which the panel seemingly accepted. The letters "Mc" cannot be totally, exclusively owned by one entity worldwide. And it's not as if people are going to mix up McCurry with McDonalds. Now, if McCurry used the golden arches, had a clown and similar characters associated with the restaurant, that would be problematic. Those elements were not present in this case. On our site, http://www.trademarksprotected.com,we help with these trademark issues and any trademark questions.